The ten sports for the real man 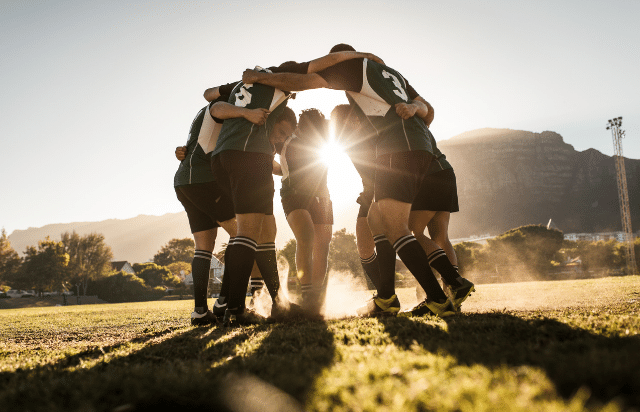 These days, we men are increasingly choosing to park ourselves on the couch when we have nothing to do, whereas in the past – before all the electronics and smartphones – we would just drag ourselves down to the local sports club every Saturday and Sunday morning. Many men are finding out that watching other people sweat is much more fun than to sweat themselves. But hey, sports can be quite fun. You probably know the traditional sports, or you practice them too, which is no problem. But we want to introduce you to male sports that are (not) very popular in the world, but are very cool. Maybe these sports will get you off the couch.

Rugby is perhaps the most masculine sport to be found on this list. And fortunately, the sport is slowly becoming more popular in our country. It is a sport where you have to push yourself mentally and physically to the limit when, for example, you are tackled at full speed by three running mountains. That may not sound very appealing, but it really seems to be a lot of fun. Aside from the badly battered athletes and broken bones, rugby is also known for the tremendous sportsmanship that can be found on the field and off. Which is pretty impressive, just imagine how hard it can be to be nice to the guy who just literally made you sling mud (and some blood).

We men are one of the greatest skating nations on the planet, to put it very modestly. We are also very good at field field hockey, but if someone with a field hockey stick goes on the ice we panic. Which is a shame, since ice hockey is pretty cool and we can be very good at it too. Flying pucks and bloody teeth and all that on the ice. They even have a nice music there and a siren when a goal is scored. What more could you want?

We’re talking about real wrestling here, not the theater they put on in the United States. It is a martial art that was already fanatically practiced by different cultures in ancient times, where not only do you have to use a lot of physical force to win, but you also have to stay sharp to outsmart your opponent. A difficult and fun sport that is often underestimated.

This sport may no longer belong in this list, since today there are many men who use metal or wooden sticks to hit grass into the air. But golf is still a sport where style and elegance often reappear, and it is somewhat different from the quite violent sports above. It’s also no longer a sport for the super rich, in fact more and more young men are taking up the sport.

Athletics is a broad sport that combines all kinds of disciplines, think: sprinting, high jump, javelin throw and shot put. It is the sport, or it is actually several sports, with which the Olympic Games once began. Each sport appeals a bit to our primal instincts and competitiveness, which makes it a bit different.

Growling engines and roaring exhausts, we don’t know why, but we men will always have a soft spot for it. Many men also have a tendency to break the speed limit with some regularity, and secretly we all do it. The only downside to this sport is that you need to have quite a bit of money in your bank account, or you need to find good sponsors, which can also be quite difficult.

Hurling is a very unknown sport that originated in Ireland, and it is also a very old sport that has been practiced by Irish tribes since ancient times. It is actually a combination of field field hockey and rugby, you have a kind of hatchet shaped field hockey stick with which you have to score, just like field hockey. It is a contact sport, as it is officially called, which also means that you can tackle each other and destroy each other in all kinds of ways. In hurling, you may even use the stick to hack into your opponent, which is probably not entirely painless. It is also the fastest field team sport in the world. It is not very popular yet, outside of Ireland, but slowly other countries are starting to discover it, including the Netherlands.

Baseball is often associated with the United States and also with men with an above-average fat percentage, but if you think about it, it is quite masculine. I mean, you have a big bat and you can hit things with it, it doesn’t matter that it’s only a small ball, it’s the idea! Also, it turns out the Netherlands are pretty good at it, in 2011 we even won the World Cup.

Above we wrote I think already about primal instincts, but if it comes back in something it is in survival. Survival, climbing through trees and throwing mud. Pretty manly, right?

This sport is well known but there are few men who actually practice the sport, because they simply do not want to spend a few days in the hospital every time after training. Which we can agree with. For those unfamiliar with the sport, it is a combat sport where the fighters are allowed to do almost anything. As the name suggests, just about all martial arts are combined in this sport, the fighters themselves usually come from other martial arts before starting an MMA career. We only recommend that you take up this sport if you are completely okay with a hospitalization and head and body disfigured by all the violence.